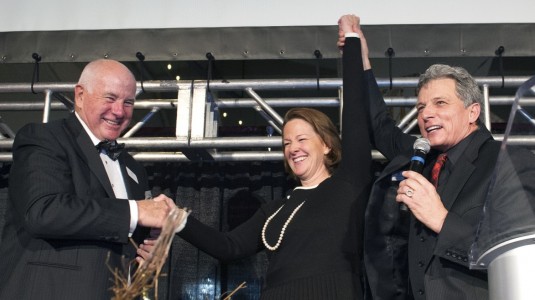 I was looking for an interesting way to kick off this year’s Edmonton Festival of Trees, held last night at the Shaw Conference Centre, and decided to try something different… a ‘Centrepiece Auction.’

I asked for a volunteer at each of the 90 guest tables to stand and act as a guest auctioneer. They had two minutes to sell their table centrepiece, a 30″ tall reindeer made of twigs. The winner would receive a pair of gold earrings donated by Kline Fine Jewellers.

When the two-minute time limit was up, I asked those who had raised at least $1,000 to remain standing. To my surprise, there were several.

I had them both come onstage to declare their results. When Ritchie sheepishly announced that he had sold his centrepiece for $2,200, the premier let out a holler.

“I sold mine for $4,350, but I can’t accept the earrings. So auction them off and I’ll buy the successful bidder lunch!”

What happened next is beyond belief.

When the price soared to a whopping $20,000, I asked the premier if she would donate a second lunch if the second-high bidder would match the $20,000.