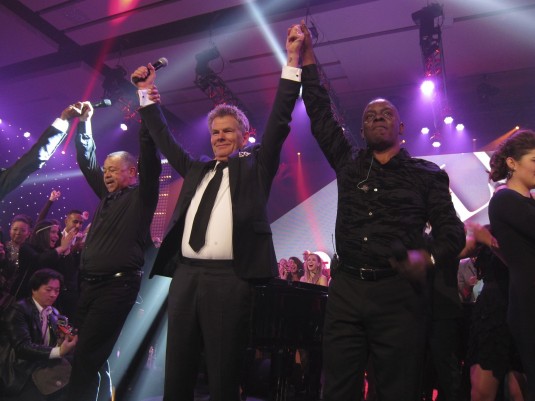 I can’t think of a better way to wrap another HUGE year of fundraising auctions; my first for 2013 was the STARS Air Ambulance Gala in Calgary back in January where we raised almost $1.2 million; my final auction was in Toronto last night where we raised another $1.2, this time for the David Foster Foundation.

And in between these two bookend auctions? Probably another $30 million; what a year!

As the official auctioneer of the David Foster Foundation, I get to sell some extraordinary items, like Grammy Awards VIP packages; a ride around the track at the Indy 500 with Mario Andretti; and at last night’s gala, two First Class flights to Florence, Italy, where the lucky bidder will be hosted in the home of non other than world-renowned tenor Andrea Bocelli.

Somebody’s gonna get lucky, but not before he pays off his VISA card – that 7-night fantasy trip sold for a jaw-dropping $175,000!

All in all, Foster’s Miracle Gala raised $4 million through ticket sales ($3,000 per person), sponsorships, donations, and auction for the David Foster Foundation, which supports families of children undergoing organ transplants.

Overall, it was a surreal night. Watching Bocelli perform with Foster at the sold-out event is something I can now scratch off my bucket list, and reaffirmed what I already know… I’ve got to be the luckiest fundraising auctioneer in North America!