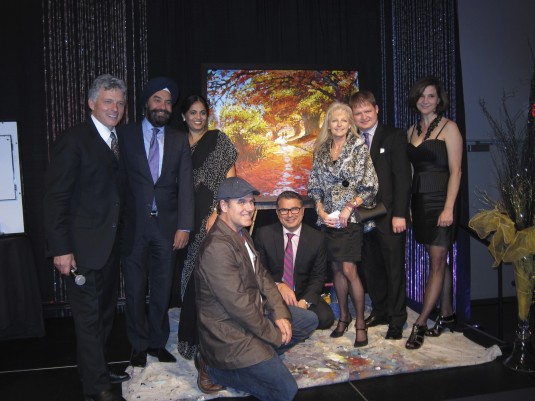 The Opening Doors For Autism Gala held Friday night at the Edmonton Expo Centre had more twists and turns than a 65-year-old pole dancer, but the highlight of the evening was setting a new record price for a painting by local artist Louis Lavoie.

And not just once…but an incredible THREE times!

When the painting that Lavoie created during the gala dinner hit the auction block, we quickly sailed past his previous record price of $6,000, eventually dropping the hammer at a jaw-dropping $21,000.

At that point I asked Lavoie if he would consider painting another picture for the second-high bidder at the same price. No sooner had he agreed when a third gala guest stepped forward and offered to pay yet another $21,000 for a painting!

And so, in a matter of a few short minutes a total of $63,000 was raised for the Autism Society through Lavoie’s talent and generosity. How wonderful that people showed such appreciation for his beautiful work.

In total, the live auction and cash appeal raised well over a quarter million dollars.